Home
\
How to make money with Bitcoin
\
Moon Bitcoin: what is it and how does it work?

Profitable faucet MoonBitcoin is a reward system, in the form of a website or app, which awards rewards in the form of Satoshi, for users who ask in exchange for completing a captcha. Let's find out in this guide what Moon Bitcoin is and how it works. 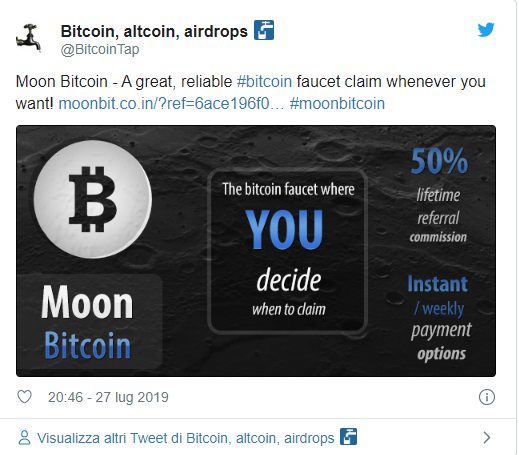 Moon Bitcoin: what is it?

Un Moon bitcoin is a creative reward system, usually in the form of a website or application that offers visitors the opportunity to earn small amounts of Bitcoin.

They work just like the normal applications that reward users with game token o Gift Vouchers to fill out surveys or even look at advertisements.

They are technically called taps because they fill up with rewards and are emptied regularly by the user.

Tap prizes are usually measured in the form of Satoshi (1 Satoshi = 1 hundredth of a millionth of a bitcoin).

All the Bitcoin prizes that users earn are transferred to a Bitcoin E-Wallet accessible thanks to the use of a private key.

Bitcoins are protected by a cryptographic system complex that guarantees maximum security as long as users do not share private keys with third parties.
Visit Moon Bitcoin

Moon Bitcoin: what are the advantages?

Moon Bitcoin remains one of the most visited taps on the Internet, with a global Alexa ranking by 3.945.

Moon Bitcoin Bot: how does it work?

It's a free 100% service and registration takes just over 2 minutes to complete all the steps required for registration.

To register just enter the email address and once the account is created you can access coinpot, microwallet where you can deposit all the cryptocurrencies.

At each "claim now" they accumulate 3 coinpot tokens that can be converted into satoshi or any other cryptocurrency.

I Bonus are divided into five different categories:

Users who request Bitcoin prizes at least once a day are entitled to an additional 1% per consecutive day.

For each referral, users get a percentage point and continue to accumulate until they reach 100%.

For 50 referrals, users will receive a commission of 50% on all faucet complaints of the indicated users.

Referrals are considered active only if the new user submitted at least 1 complaint in the last 72 hours.

This is a bonus that occurs unexpectedly at the bottom of the page when users try to request free Bitcoins.

These are special bonuses that users can earn by completing offers and surveys. The more surveys are completed, the more a user can potentially earn.

For every offer or survey completed within 30 days, a bonus of 5% is assigned.

A bonus of 100% is recognized when the tap uses a user's PC to extract Bitcoins. The mining process requires a significant amount of CPU utilization of the electronic device.

Bitcoin is making significant progress as a reliable payment tool. However, in order for it to appreciate its full potential, Bitcoin must be accepted by the public as a medium of exchange.

A good way to achieve this is to use Bitcoin taps that reward users and encourage their adoption.
Visit Moon Bitcoin

For more information on additional ways to earn bitcoins, trade with bitcoins or buy bitcoins you can consult our complete guide.